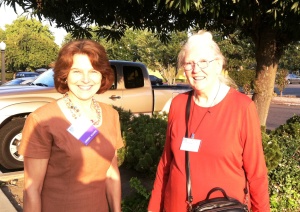 A wonderful confluence of events will bring a world-renowned storyteller to our doorstep this February. Anne Pellowski is in between visits to Ethiopia, where she taught families how to make their own cloth books, and Central America, where she will assist with the Bibliobus project. A native of Wisconsin and active member of the International Board on Books for Young People, Anne is truly a citizen of the world. Anne has kindly offered to present a program on storytelling for librarians on Friday, February 3rd at 10:00am in the SCLS auditorium. She will demonstrate how she makes cloth books and teach us storytelling techniques using our fingers, string, paper, and handkerchiefs.

Anne presented at SCLS about 18 years ago and it was a workshop Joanne K. of the Commack Public Library has never forgotten. “A librarian who attends Anne’s presentation on February 3rd will never forget it either,” Joanne said at the Dream Big meeting on January 17th.

If you work in a Suffolk County library, please register for Anne’s program online or by contacting SCLS Youth Services. If possible, please bring a handkerchief with you to the program. In the meantime, check out Anne’s books, which cover the whole spectrum of storytelling, from techniques and presentation ideas to history and research.

Nearly 250 librarians, authors, professors, publishers, and students gathered at California State University at Fresno for the 9th Regional IBBY (International Board on Books for Young People) Conference this past weekend. The United States Board on Books for Young People (USBBY) hosts the IBBY Regional Conference every other year at a site in the United States. USBBY Executive Director Ellis Vance reported that there were representatives from 30 states and 6 continents at this event celebrating international children’s literature. Fresno State – home of the Arne Nixon Center for the Study of Children’s Literature – made an ideal setting for the gathering. The Nixon Center’s special exhibit “Down the Rabbit Hole with Lewis Carroll and Leonard Weisgard: Literary, Visual, and Sculptural Translations of Alice’s Adventures in Wonderland” was the icing on the cake. 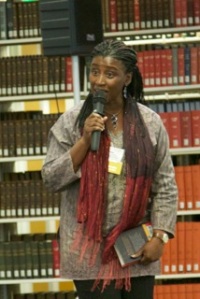 The theme of the conference was Peace the World Together with Children’s Books. Some of the featured speakers were Pam Muñoz Ryan, Margarita Engle, Grace Lin and her editor Alvina Ling, Adwoa Badoe (pictured right), David Diaz, Roger Mello (a talented and prolific illustrator from Brazil), and Dorothy Briley lecturer Beverley Naidoo. Mary Lois Nicholls, retired children’s librarian from Smithtown, Anne Pellowski, K.T. Horning, Nina Lindsay, and Michael Cart were just a few of the well-known participants present from our field.

On Saturday morning, the group broke out into book discussion sessions featuring the books of the guess speakers. I particularly enjoyed discussing Between Sisters by Adwoa Badoe. When storyteller Badoe addressed the group, she treated us to a tale about why fisherman always sing the same peculiar folk song. On Saturday afternoon I sat in on a session led by the previous and current chairs of the Outstanding International Books Committee, Elizabeth Poe and Kathy East. The two chairs book-talked twenty-two books from the 2010 and 2011 lists that pertained to five themes: fleeing oppression, surviving adversity, forging friendships, finding family, and creating peace.

Doris Gebel (pictured here with Beverley Naidoo) presided over the awards ceremony on Saturday evening. One of the many people she introduced was long-time supporter of USBBY John Mason (Scholastic), who chaired the committee that selected Beverley Naidoo to give the Dorothy Briley lecture. Naidoo delivered her remarks – which included an homage to editor and publisher Dorothy Briley – in an arresting, almost hypnotizing voice. It was an unforgettable evening. 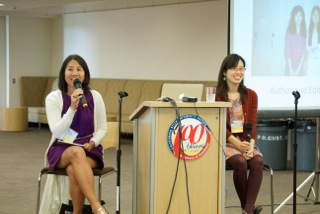 When Doris asked what my favorite part of the conference was, I was hard-pressed to answer. Hearing Grace Lin read from the first chapter of Starry River of the Sky, the companion novel to Where the Mountain Meets the Moon, was certainly a high point, as was seeing the work of an illustrator as talented as Roger Mello (especially since his books are, regretfully, not available in the States). Margarita Engle’s story about her grandmother who lived her whole life believing she was “word blind” was heart-wrenching (Engle’s grandmother, who was dyslexic, is inspiration for the

protagonist in Engle’s next book titled The Wild Book.) But my favorite part had to be hearing Kang Woo Hyon speak about the making of Peace Story, a collection of illustrated stories commissioned for NAMBOOK-010, the Nami Island Children’s Book Festival in Korea. Peace Story is available to Suffolk library staff from the SCLS Youth Services Review Collection.

The next USBBY conference will be in St. Louis, October 18-20, 2013. If you can’t wait that long, the next IBBY Congress is next August in London! To become a member, or for more information, visit the USBBY website or contact Doris at the Northport-East Northport Library.